When I set out for the Gifted Homeschoolers Forum April Blog Hop Giftedness at Different Ages and Stages I left Sprite doing her homework which was to write an essay titled Can a leopard change his spots? Intellectual Dabrowski was supervising her homework efforts.

Apparently the twice exceptional Sprite had been attempting to Plead the Pink Slipper  and do as little writing as possible.
Intellectual and P’est Pour Parfait, the Perfectionist Poodle had been very disappointed with Sprite’s effort when she first claimed to have finished her essay.

“Look at what she wrote!” growled Intellectual

“But” continued Intellectual “you will be pleased to know that I encouraged her to put on at least one investigative Grey Sneaker and do some research about whether the size and shape of leopards’ spots do change. I brought her a stack of books and some scientific magazines.  And she found some interesting articles about it on the internet.”

“Psycho Motor suggested that she should phone her mentor, Paula the Physicist and Paula suggested that Sprite could make a Voicethread or PowerPoint presentation instead of writing an essay. Sprite was happy because that seemed easy enough to do and she had lots of information.
But then Psycho Motor wanted Sprite to ask Paula if there was anything interesting to see through the telescope and I had to growl at them to stop her from getting completely distracted!”

“Imaginational Dabrowski was being really helpful for once” continued Intellectual.  “He suggested to Sprite that she should think about layers. (When he said that Psycho Motor wanted to stop doing homework and watch Shrek)”
“Imaginational explained that he meant Sprite should think about what parts of a person or animal would or would not change. What was it that made a person who they are? What was at the core or essence of their being? And did the core or essence develop and change?  Imaginational wanted Sprite to think about body, mind and spirit and about some very heavy philosophical, theological and existential matters.”

“And of course I was happy to bring her a stack of books!” boasted Intellectual.
“But then I became overexcited in my information gathering and made the mistake of bringing her some weighty volumes.
I brought her Strong’s Concordance to the Bible, Roget’s Thesaurus, a book about the soul in various religions, a book about existentialism and  Dabrowski’s Theory of Positive Disintegration in the original Polish.
The stack toppled over onto her sore ankle and also landed on Sensual Dabrowski as well.”

“So Sprite and Sensual were yelping and Emotional started howling in sympathy and we did not get any more homework done.
But she has gathered a lot of information and good ideas. She could make a really good presentation if she just had some more time.”

“You will find Sprite on the couch with an ice pack and chocolate.
Now she really does need to Plead the Pink Slipper.
Could you write a letter asking for her to be given an extension?” 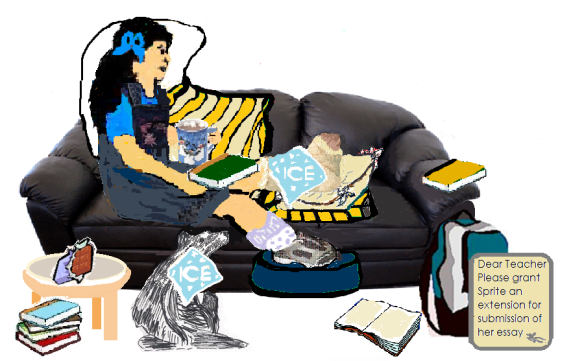 3 thoughts on “Back from the hop”