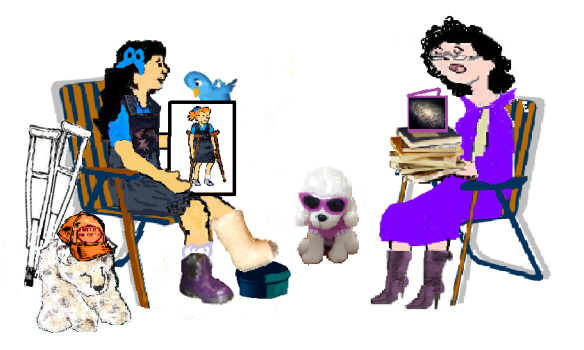 “I think I have an Apprentice and I don’t know what to do about it!” Sprite told her mentor, Paula the Physicist.

“There is a little kid in a lower class who follows me round and copies what I do.  When I got my new pinafore she wore a pinafore just like it two days later.
She always wants to have a go on my crutches and if I sit down to eat lunch she will try to borrow them. Sometimes I do let her use them.
I noticed she has a bandage on her ankle so maybe she is like me.”

“Why do you think she is your Apprentice?” Paula asked.

“It was something Retweet said yesterday.” Sprite replied. “How did you know you were supposed to be my Mentor?”

“Well you asked Jo to invite a Physicist to your P Party back in 2010 and Jo chose to invite me. And because we arrived for the party a month late we had an opportunity to spend more time talking than we would have had at the party and we discovered the things we had in common. I was able to share the things I had found helpful to me and our mentor/apprentice relationship has developed from there.”
https://spritessite.wordpress.com/2010/01/30/the-professor-the-physicist-and-the-palaeontologist-arrive/