The time of the singing of birds has come. Song of Solomon 2:12

The Twitter birds joined a group of Australian birds for a sing-a-long.
Kookaburra tried hard to refrain from laughing, Wedge-tailed Eagle soared overhead seeking his next meal and the budgerigars were more interested in kissing (just a pair of lovebirds).
On the ground the Lyrebird donated  by

held a full concert of his own complete with song dance and mimicry. If you would like to see Lyrebird’s concert go to http://www.youtube.com/watch?v=VjE0Kdfos4Y

Here are the Australian bush animals who were gathering outside the GT Stoogies annex. The possums came out earlier than usual but platypus was too shy to put in an appearance.

In the background Yellow Dog Dingo can be seen still chasing Old Man Kangaroo through the spinifex and mulga as he was in the tale The Sing song of Old Man Kangaroo from Just So Stories by Rudyard Kipling. You can read this story in ebook form thanks to Project Gutenberg at http://www.gutenberg.org/etext/2781

We returned from the Aussie Rules Football match just in time to put up the table of Down Under Delicacies – Lamingtons, Anzac biscuits, pavlova, meat pies and vegemite and some Aussie flags and posters. Outside the Australian animals and birds are gathering and the camp fire is lit for billy tea and damper. I will put up more pictures if time permits.

Intellectual and Psycho Motor Dabrowski are joining the Australian taste tester dogs Australian Cattle Dog, Kelpie, Australian Terrier and Australian Silky Terrier in a pre #gtstoogies Down-under Delicacies Feast game of Australian Rules Football. They are waiting for the first centre bounce of the ball to get the game started.
Like Jack Russell Terrier, Intellectual Dabrowski, the Border Collie, feels very much at home as, although Jack Russell Terriers and Border Collies originated in the UK, the breeds were also developed in Australia.
Psycho Motor is well accepted by the Aussie crowd because he is very active and a bit of a larrikin. He is bouncing already, hoping to take “a screamer of a speccy”, as the Aussies call leaping up to mark the ball by grabbing it in their hands.

“That was the best Introducing Yourself exercise ever!” Sprite told me.
“We had to make a picture describing ourselves with dots for International Dot Day http://www.facebook.com/pages/International-Dot-Day/141533819216932?v=info#info_edit_sections

It is all based on a book The Dot about a girl called Vashti who didn’t think she was creative until she drew one dot. The message is just make a mark and see where it takes you.
You can read about it here http://www.fablevision.com/education/products/dot_book.html
You can see some of the work done last year at http://fablevisionlearning.com/blog/?cat=57

“So, tell me about your dot picture” I said.

“Well, I asked Imaginational Dabrowski to help me think of all the things I do which are dot shaped. So I put in the Shape Collages of pictures of me and pictures of my holiday. I put in the life balance wheel and that made me think about time and infinity. Infinity reminded of space and Mandelbrot sets and Mobius strips and that reminded me of Mobius bagels.”

“I can see that you have also put in a tessellation dot, a water drop dot and balloons and one of your protest march banners” I said “But why is there a kangaroo in the picture?”

“That is the kangaroo from the Australian children’s book Dot and the Kangaroo. She came looking for Dot”

The journey through cyberspace to attend the #gtstoogies Global Bake off – Delicious Dessert Delicacies proved typical of life with Dabrowski’s overexcitabilities.

Sensual complained throughout the trip. The seat was too bumpy. The wind was blowing in his face and whistling in his ears. He felt queasy. He was anxious about the food at the Bake off and wondered whether it would contain anything that he would be allergic to which would make him itchy.

Intellectual kept up a running commentary about the geography and history of the surroundings and tried to engage everyone with word games, memory games and I spy type games. He did become a bit tedious and pedantic at times.

Emotional reacted with yelps of delight or howls of despair to every sight, sound and scent.

The Twitter birds have called in the Ow.ly birds to help give directions and act as shorteners for our cyberbike journey! 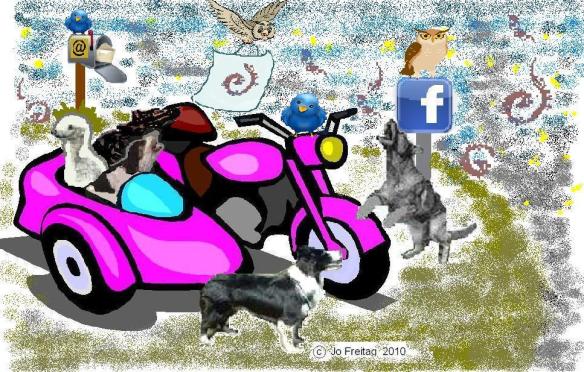 “Ride your Cyberbike up past your email account.. turn right at facebook junction… drive up the global network highway until you reach the summit.. nestled down below in the darkness you will see some softly twinkling lights.. spiral down via information whirl to the end following the tendrils of banana and chocolate…”

We do not need to fly in international taste tester canines for the Global Bake off but as I set off on my Cyberbike to deliver the Pavlova, Lamingtons and Chocolate Ripple Cake from Australia I realised that Emotional, Imaginational and Sensual Dabrowski were already in the sidecar, Intellectual was ready to hop up on the seat and PsychoMotor was running and bouncing along beside the bike following the delicious smells of chocolate which were wafting through the air !

“Stationery steps? Do you mean like walking on the spot?” asked Sprite when I suggested that our next step in the process of getting organized would be stationery steps.

“No I mean stationery with an e as in envelope not stationary with an a as in standing still’ I said “You can find out about common mistakes people make in English usage at Common errors in English Usage”
http://www.wsu.edu/~brians/errors/

One reason Sprite had problems getting organized in the study area of her life was that she never had the materials she needed for study in the place she needed them – they were at school when she needed them for homework and left at home when she should be handing them in at school.
Imaginational Dabrowski was getting tired of her claiming that the dog had eaten her homework and was sure she should be able to find more original explanations.

The school was making some token moves towards being the Paperless Classroom advocated by Shelly Blake-Plock http://teachpaperless.blogspot.com/ but they still relied on some textbooks and ring binder notebooks.
We implemented advice from Allie Golon http://www.visualspatial.org/Articles/orgskill.pdf about using binders and colour coding for different subjects.

Gathering and storing information ‘in the cloud’ has helped as information can be accessed from anywhere online.
As well as the colour coded ring binders we set Sprite up with online LiveBinders from http://livebinders.com/
Dropbox https://www.dropbox.com/ and Google Docs are useful for storing and accessing documents. Bookmarking sites such as Delicious http://www.delicious.com/ and Diigo http://www.diigo.com/ are also useful.

The steps of a good man are ordered by the LORD: and he delighteth in his way. Psalm 37:23

Commit your way to the LORD,Trust also in Him, And He shall bring it to pass. Psalm 37:5