For general chat such as sharing recipes before and after the Twitter #gtchat sessions you can log into #gtstoogies
The theme for the #gtstoogies for tonight is Mexican so I asked Sprite to prepare some Mexican food for me to to take.
Sensual Dabrowski wanted to do a taste test but was not sure what the taste should be so he invited two of his friends who would have local knowledge.
In a hushed respectful tone Sprite introduced them.
“This is Pepe the Chihuahua and this is Xoloitzcuintles Perro Pelón Mexicano the Mexican Hairless Dog”

“I want to go somewhere different these holidays. I would really like to go to Sydney and do a Scientia course at GERRIC
Look you can read all about it here.”
http://gerric.arts.unsw.edu.au/students/wrkshps.html

And I was looking at the GIFTED 2010 11th Asia Pacific Conference on Giftedness Sydney 29 July – 1 August 2010 http://www.gifted2010.com.au/ and sighing.
“I would love to attend the conference in Sydney but I don’t think I will be able to afford it.” 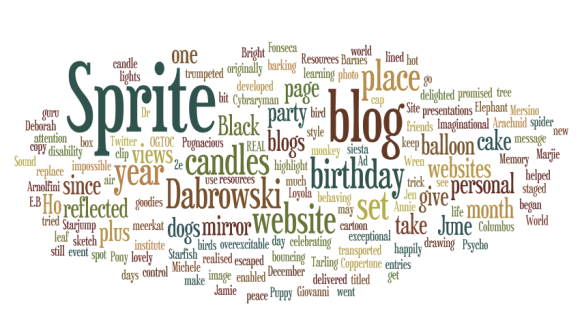 Arachnid the Spider announced the she has completed the E.B. White style web for Sprite and is ready for the close up picture. She JPEGged it to the topiary tessellation bird leaf tree and told me that if I wanted it to be a real GIFt I should animate it. 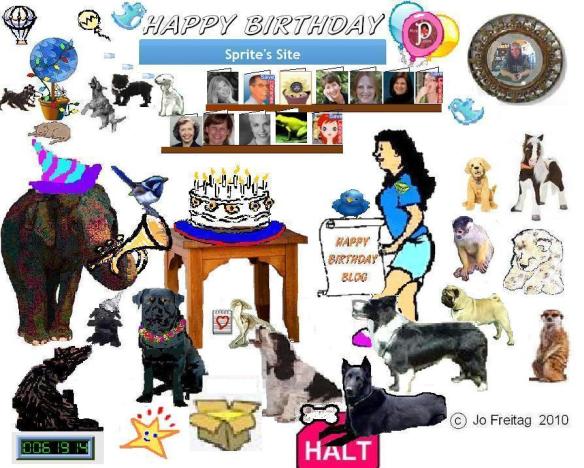 In June 2009 Sprite staged a take over of the Blog on my personal website.
It was originally set up in December 2008 titled Ho Ho It’s Jo! I realised that some of the entries I had included in the blog on Gifted Resources website really should be on a personal blog and my tech guru, Jamie Tarling set this one up for me. But I did not make much use of it.

Sprite, the little cartoon character that I had developed to illustrate presentations began to take on a life of her own and the blog seemed the ideal place for her to express herself while drawing attention to 2e (twice exceptional) students who are gifted and have a learning disability. It also enabled me to highlight programs and resources and give links to other blogs and websites which I had found useful.

I wanted to give Sprite a birthday party which reflected the activities on the blog for the year.
We tried to get everyone lined up for a photo but it was almost impossible.
Psycho Motor Dabrowski and Little Bully Black Dog were off bouncing and barking at the lights on the topiary tessellation bird leaf tree and Imaginational Dabrowski was being transported by the sight of an escaped balloon to a ride Around the World in 80 days in a hot air balloon.
Arachnid, the spider, was still working on website design but promised to set up a birthday message image in the style of E.B. White.
Caramel Cat refused to budge from her siesta place in a spot of sunlight.
In the end we had to settle for my sketch of the event. You can see me reflected in my new clip art mirror which I selected to replace the copy of the Giovanni Arnolfini mirror which Sprite claimed I had stolen.

Jen E Wren and Starjump Starfish were there and PLIESE had sent a box of goodies. Eidetic, the Memory Elephant, wore a party thinking cap and trumpeted happily. Puppy and Pony, Columbus Cheetah, Pugnacious Loyola, a monkey and a meerkat were all present. All the overexcitable Dabrowski dogs were there and the Black dogs were there too but they were under control and behaving themselves. The Origami Secretary Bird stated that it was a gathering to institute cake day in the work place once a month.

Her cake had 12 candles – one for each month because 1 single candle looked a bit lonely. They were trick candles which do not go out when blown. Sprite was delighted and said she would keep wishing for world peace and a REAL pony until the candles went out!

Dear Miss Sprite,
Well I guess it has been while since we last spoke … I have missed our
conversations!
Congratulations on your birthday and I hope you receive some of the
presents on your list 🙂 .
I have been having a little trouble with my hip. I have not been able to
sit at all and I have been trying to write standing up (ironing boards
have multiple uses!). I am much improved and should be fully recovered
in a few more weeks.

I have a special present for you, two photo’s. One is of my son’s pet
cheetah whose name is Cheet. The other is of our friend Alfred, the Kiwi
bird. Alfred and his friends get up to a lot of mischief behind my back.
Recently, Alfred and his friends were nearly caught by some humans when
they mistook a trailing balloon string for a worm and couldn’t hold on
any longer so they all fell into chicken poo in someone’s backyard.
Luckily, they escaped under the fence … Creating bedtime stories for
my son is taking up some of my time.

Time is upon me again and I need to go cook dinner. I sometimes wish I
was able to extend time similar to when Colonel Jack O’Neill and Dr
Daniel Jackson are caught in the time loop on Stargate SG-1.

Hope to see you at your birthday,
Jen-E-Wren

The Birthday Hint post it notes have started to appear!
Funny that her wish list is very similar to my own!
And she is still trying for the REAL!!! Pony.